Home News National DAA at the ADI 2018 Conference in Chicago

National DAA at the ADI 2018 Conference in Chicago 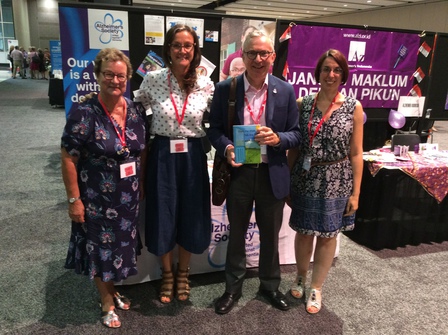 On 27 July 2018 Alzheimer’s Disease International’s 2018 conference took place and the National Dementia Action Alliance we’re delighted to be invited to speak as Executive Lead Kelly Kaye (far right in the picture) led a session on our From Seldom Heard to Seen and Heard campaign. Kelly presented on a panel along with speakers from the USA, Cuba, Canada and New Zealand on the overall topic of ‘Diverse populations – inclusion and equality’.

Our Seldom Heard to Seen and Heard campaign focusses on adapting support to suit the needs of people affected by dementia from seldom heard groups. These groups include LGBT+ communities, BAME communities, young onset dementia, the prison population, rural communities and people with learning disabilities.

You can read articles that we have written on From Seldom Heard to Seen and Heard here: 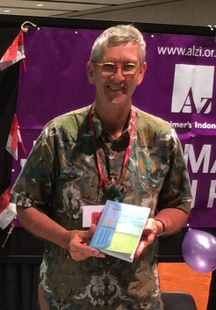 Also in attendance at the conference was National DAA steering group member Keith Oliver from the 3 Nations Working Group UK. Keith spoke on a session entitled ‘Dementia Alliance International (DAI) The WHO Global Dementia Action Plan: What people with dementia want’. Keith describes the experience of attending and speaking at the event below.

Having submitted an abstract to ADI on behalf of the 3 Nations Dementia Working Group on the co-production of the Dementia Statements and their focus upon our rights it was with mixed feelings when I heard the abstract had been accepted. Delighted and excited to be given this opportunity of speaking at such a prestigious event about a piece of work I feel passionate about, but apprehensive about the fact that the event would be in the USA, a country I have never had a desire to visit.

I need not have worried. The support Rosemary and I received both before and during the conference from Alzheimer’s Society staff was superb and this alongside the encouragement of friends both face to face and via Facebook was immensely motivating.

In the end I was asked to deliver three talks, one as a joint piece with Prof Linda Clare from Exeter University to a full, enormous auditorium. Everything in Chicago seemed enormous – the skyscrapers, Lake Michigan, the conference venue and the food portions in the restaurants! Another was at symposium of people with dementia from around the world and I was asked to speak as the European member of the panel and to address the issue of research. The third talk was the one I originally submitted on the Dementia Statements and rights. Here are a few quotes from this talk …

“The key words that all 5 statements have are “WE” and “THE RIGHT TO…” This was deliberate and places the statements on a more significant level than the previous statements which became affectionately known as “The I statements” as they didn’t acknowledge the needs of the family carer. Good days for me are good days for Rosemary, my wife and vice versa, and when either of us has a bad day then that is the same for the other person. As my late friend, and founder DAA member Peter Ashley used to say – we are two sides of the same coin”.

“I know from my role as the person with dementia on the steering group of our national Dementia Action Alliance who did a splendid job in getting the initial statements in place are 100% behind and involved in the new statements. This unity of purpose from over 100 national organizations in the UK gives great backing to the impact the statements are having and will have in the future…”

“Wherever you’re coming from there is something in the statements for you to use in your own country based upon shared beliefs and principles focusing upon ALWAYS genuinely involving people affected by dementia in the shared ownership of all activities. If that is the case tomorrow when it dawns will bring sunshine and a better life to all of us living with dementia.”