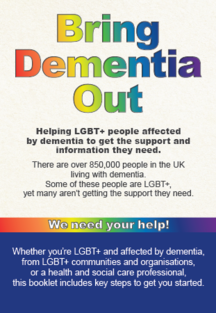 Bring Dementia Out was launched in January 2019. As part of this innovation, National Dementia Action Alliance are proud to have co-produced a booklet, online hub and poster with LGBT+ people affected by dementia, Alzheimer’s Society, and LGBT+ organisations (including Switchboard in Brighton and Hove, LGBT Foundation in Manchester, and the National LGBT Partnership). Bring Dementia Out is an innovation that aims to help LGBT+ people affected by dementia get better access to support and information in Brighton and Hove and Greater Manchester. The booklet sits alongside a series of resources, including a video, online hub and posters, to raise awareness and understanding of challenges faced by LGBT+ people affected by dementia. This was tested in Brighton and Hove and Greater Manchester over January and February this year.

The Bring Dementia Out booklet, which can be ordered through the online hub, details some of the additional challenges LGBT+ people affected by dementia may face:

If you are in Brighton and Hove or Greater Manchester and are interested in ordering the booklet and finding out more about Bring Dementia Out and how you can help, please visit alzheimers.org.uk/get-involved/bring-dementia-out